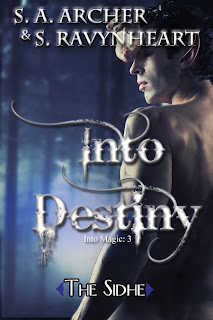 At the very mention of the word ‘werewolves’, Malcolm froze. Every muscle in his body tightened. Even breathing came hard, with his ribcage so rigid about his middle. Not even his eyes blinked, as he stared right at the Brownie that had just blurted this out when he brought the tray of food to him and Willem.

In that frozen instant, Malcolm didn’t care a whit about the artifact puzzle he’d obsessed over since finding the first piece. His home… His people… were in danger.

And the little Brownie just popped off about it like it was some bit of gossip.

Quick as a snake, Malcolm snatched the little fey by the front of his shirt and jerked him close. He had to know more. Had to know what happened. Had to know if everyone was alright.

Was no place safe?

Jerked from his feet, the Brownie squawked. His small hands covered the leather bands around Malcolm’s wrists, but he wasn’t able to break his grip. Which only proved how fragile the Brownie was. Not since the silver burned deep grooves into his wrists did Malcolm have a lot of strength in his hands.

Willem leapt from his cot where he’d been consulting his journals, hurtled over Tiernan, who’d fallen asleep on the floor, and skidded to a stop just short of bashing into them. “Was anyone hurt?” The Scribe blurted out, asking the question Malcolm needed the answer to.

“I don’t know!” The Brownie wasn’t any bigger than the Scribe, both of them like a foot or so shorter than Malcolm. Both of them with those big, innocent eyes that seemed to plead with Malcolm. Like a child’s.

This Brownie couldn’t tell him anything. Malcolm twisted away from him, letting his eyes refocus to see not the physical world around him, but the magical one. As he turned slowly, he didn’t see the wooden frame and the stadium-sized canvas tent that surrounded him and the artifact puzzle.

Magic drenched everything on the Isle of Fey, making the landscape itself glow and hum. Down a little ways, the fey town was alight with every kind of magic. The lesser fey gave off glittering light of every color, depending on their race and talents. But besides himself, which didn’t give off any kind of magic, and Tiernan snoozing on the floor, his energy so knackered that even his magic was pretty much sticking close to him, he didn’t even see any other Sidhe on the island.

Twisting around, glancing up toward the mountain that rose up on the eastern side of the island, Malcolm did finally catch sight of Trip. Her shadows flicked up there with a bruised black and purple hue. So there was one. But where were the others?

He didn’t really even need to ask that question.

They’d all been at the Glamour Club.

Too far away for him to see.

Too far away for him to teleport to.

Couldn’t do anything useful.

His gaze flicked down at Tiernan. He could teleport that far.

Malcolm punched into his palm, furious with his body for fighting him. Shaking out his hands, he banished the tension choking him. When he spoke, it came out rough, but at least it came out. “Wake up!” Standing over Tiernan, he nudged at the bloke’s side with his trainers. “Tiernan!”

The groan from Tiernan threatened death to the idiot that didn’t leave him be.

Willem and the Brownie, whose name Malcolm didn’t know, backed away. No way they were going to be in the middle, if two Sidhe were going to tussle.

Tiernan might wallop him for waking him, but Malcolm didn’t care. He bent down to grab his shoulders and shake him. “Wake up!”

But Tiernan didn’t. Just shoved away from Malcolm and rolled to his other side, then jerked the pillow back up under his head. Just as quick, he was back to sleep.

But it didn’t matter. A whoosh-pop of teleportation made Malcolm’s head jerk up.

Jumping up, Malcolm blinked past the world at the magic again. It hadn’t been real close, but it had been pretty big. Someone with strong magic, like a Sidhe.

Down the hill… All the way to the beach.

Malcolm broke into a run. Once outside the tent, he could see for real the place he needed to go. The slope from here to the beach wasn’t steep, but it was probably a good fifteen minute run through the middle of the village, which was crowded even in the early evening.

Teleporting was more of an accident than an intension. In mid-run, Malcolm ‘slipped’ and teleported just a few strides short of the front porch of the beach house. The sandy ground gave under his feet more than he expected and Malcolm half stumbled the last bit to the porch. He leapt up onto it just as the front door opened and Donovan stepped out.

Malcolm jerked to a stop.

Only… his clothes were all ripped up and tacky with dried blood. Same for Kaitlin, whom he held against him with a steadying arm.

They weren’t still bleeding. Weren’t doubled over or hurting or anything. Dawn had healed them.

But the blood… The rips…

It had been bad. Real, real, real bad.

“They’ve been dealt with,” Donovan assured him in that stoic way. The way that said he’d dropped a mountain on them, or something equally devastating.

“Kieran? Bryce?” Shifting to the side, Malcolm glanced past Donovan, not seeing the magic from either of his mates. Only a figure of white-yellow light and the hazy outline of a Touched human. Who was the one with the light? A Sidhe. Had to be, with that much magic.

Dropping a hand on Malcolm’s shoulder, Donovan steered him back towards the village. “They’re fine. No fatalities. The wounded have been healed.”

Oh, geez. It had to have been bad to say stuff like that.

Malcolm let Donovan propel him along the dirt road back towards the town. Already the fey saw them coming, and started rushing to gather about. Not getting under foot, but still listening. “Why now? What happened?” His mind whirled, tumbling and stumbling over itself to understand. When Malcolm first came to the Glamour Club, he’d worried about Changelings, or goblins, or vampires, or even Touch-crazed humans coming after him. It’d not been long before he’d come to think of it as a safe place. A place no one would dare attack unless they had a death wish.

But even though Donovan obviously got tore up some in the fight, he didn’t seem the least surprised. “They probably found the club after Kieran’s brush with them. The sluagh would have kept them back until now.”

Malcolm glanced up at the mountain. Way up there, just now and then, he caught sight of the sluagh against the early evening sky, like great birds wheeling in the air. They’d moved to the Isle just that day, meant to protect it.

The first chance the werewolves got to attack the club, they had taken it.

The fey of the Glamour Club fought them off, but there were some badass fighters at the club. Kieran and Bryce could probably hold their own for a bit, and Donovan was flat brilliant. Then there was the head-bashing kinda fey like the trolls and red caps, that played bouncers for the club.
But the fey of the club weren’t the only ones Malcolm cared about.
He gripped Donovan’s elbow, not letting go until the boss turned his serious attention Malcolm’s way. “I want to get Regan and bring her here.”
Donovan paused, considering what Malcolm asked of him. “Do you think your father will listen?” He asked in a tone that said that they both already knew the answer to that.

“I promised I would come back for her. She’s just a kid. If the werewolves…” He couldn’t even force out the rest of the words.

“First thing in the morning.”

“Now.” Malcolm insisted, the panic mounting already. “Before something finds them.” And there were a lot of bad things out there that wanted the fey. The Sidhe, especially. There weren’t even any warriors at his family’s farm. Regan was just a kid. His da had a shotgun, but what good was that, if he didn’t see the attack coming? Or if they were overrun?

“Not like this.” Kaitlin twisted away from Donovan’s arm. She clutched the ripped front of her own shirt with one hand, and then plucked at the shreds of Donovan’s bloody clothing.

Almost immediately the crowd rustled. Within thirty seconds a pair of Brownies pressed forward with neatly folded clothing for both Donovan and Kaitlin.

Donovan, no more modest than most of the fey, changed right there. His ruined clothing vanishing into the keeping of the Brownies as quickly as the fresh clothing had arrived. Kaitlin switched out more carefully, managing the trick of putting on and taking off clothes almost simultaneously without actually getting naked. The fresh capris slipped up under her mini skirt before she removed it. The loose t-shirt went on over her head before the ripped up halter was pulled out from beneath it. It was kind of like a magic trick how she did it. All sleight of hand and clever timing. He’d seen girls naked before, but never when he was sober and never a girl who was fey. He stared at her with distraction, trying to suss out the way she’d managed the switch without showing anything, until Donovan snapped his fingers and got Malcolm’s attention again.

“You sure you want to do this now?” Donovan asked, all serious and dark.

Malcolm nodded. This time, with Donovan there, they’d have to listen.

What is Fey Cast?

I have dual citizenship. I live in the world of the Sidhe almost more than I do in reality. Lugh, Donovan, London and the rest are more than just characters to me. I live through them. I fight along side them. I celebrate with them. I've danced all night in The Glamour Club. I've experienced the Sidhe Touch and I am addicted to it. I want to share my excitement for this fantasy world with you. Fey Cast is my reporting from that world to this one.

Get Touched by The Sidhe

Optimal Reading Order
Get the episodes in the right reading order by getting the collections!